United Way of Tucson and Southern Arizona is honored to announce we received a $10 million gift from MacKenzie Scott, American novelist, billionaire, and venture philanthropist. While the gift is unrestricted, a strategic plan is in place to use the funds to fight racial and economic disparities, address COVID-19 relief, and other pressing community needs throughout the region.

Mackenzie Scott tweeted the announcement about her support of United Way of Tucson and Southern Arizona on December 15th, 2020, as part of her public commitment to give away most of her wealth in her lifetime, with United Way of Tucson included on a list of non-profit organizations worldwide that will benefit from her philanthropy in this latest round of contributions. The announcement was made six months after her most recent round of gifts, totaling $1.67 billion, that supported organizations focusing on racial and gender equity, economic mobility, climate change, and other issues. This week’s $10 million gift is the single largest donation received by the organization in its nearly 100-year history.

Article in the AZ Daily Star 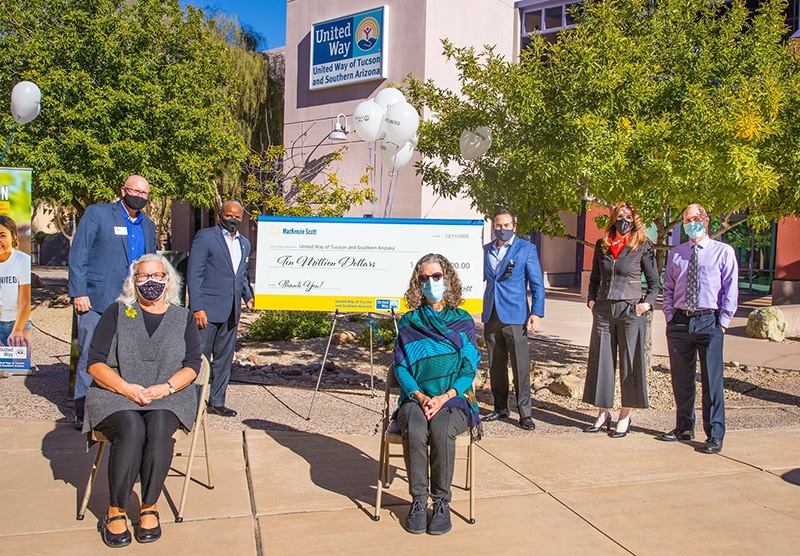 “We’re completely overwhelmed by Ms. Scott’s generosity, and are encouraged that the transformative work we’re already doing right here in Southern Arizona aligns with her interests and to drive change. Over the next three years we plan to effectively double our impact in creating equity in our community through this investment. Today one in eight individuals in our community that we are currently able to reach, will be one in four as we approach our 100th anniversary in 2022.”

President and CEO, United Way of Tucson and Southern Arizona

“The need is great, and this gift could not have come at a better time. Funds will start going out into the community immediately, through designated community partners who’ve joined us in the fight for racial equity, and we’ll continue to work aggressively to raise additional funds to show Ms. Scott how the magnitude of her investment can be multiplied.”

Board Chair, United Way of Tucson and Southern Arizona